About Half Way
So the day has come and actually gone. The 4th of August marked officially 7 months into my exchange and the least I can say is that they have flown by. Its been a while since I last wrote and that comes squarely down to the fact that im quite lazy. I also have been studying a lot more and so haven’t had as much time. In this blog, I will just briefly cover a few major things that have happened in the past few months to catch everyone up.

AustriaIn June I managed to make my way to Austria twice. Considering that I live in Munich its not actually that big of an achievement, just a mere 2 hours with the bus. The first time I went was for a weekend in Vienna. Vienna is a nice city and is still in relatively good shape, not so much of it was destroyed during the war and so the old town maintains a lot of its original look. Vienna was the centre of the Austrian empire and home to the Hapsburg dynasty and so I found Vienna as, what I would say, a fairly imperial city. Many large impressive white stone buildings, very symmetrical looking and in that typical neo classical or what ever the name of the style was at that time. Whilst I was there I was intent on having the full Austrian experience. I was going to eat apple strudel, I was going to eat a Wien (Vienna) schnitzel and most importantly I was going to eat the world’s best chocolate cake. Vienna has a very strong ‘coffee culture’ with the history being that after the failed Turkish siege of Vienna in the 1600s, the Ottomans left behind the coffee bean which apparently was a hit amongst the locals. As a result, there are loads of really neat little coffee shops hidden away all over the city. A fun fact associated with these coffee shops is that the cappuccino, the humble Italian sounding coffee, is in fact Viennese and was invented in Vienna. What makes this fact a little more interesting is that the schnitzel, the relatively German sounding crumbed and fried slice of meat, was actually invented in Italy. In these coffee shops it is also normal to have a slice of cake alongside of your coffee and one of these being the best chocolate cake in the world. About 200 years ago the king / emperor at the time was hosting some very important people and on the night of the big reception he fell ill and could not attend. Fearing displeasing his guests, he asked his kitchens to make a special dessert. The task fell to Hanz Sacher a crafty young apprentice chef who just happened to make a chocolate cake that was so good, the recipe has been safe guarded by a café/hotel in his name for over 200 years. It was at this hotel where I decided to take my afternoon coffee and give the cake a shot. Because of this cakes fame and the way it is peddled every morning to tourists by the free walking tour guides (precisely how I found out about it), the place was packed. I ordered a cappuccino and the Sacher Torte to a fairly cold waiter who I think was sick of dealing with tourists all morning. In the end I got served my coffee and cake, however, it wasn’t the Viennese cappuccino id asked for. It was a special kind of coffee that was supposed to be drunk with the cake. I didn’t mind, I was confident the waiter knew better, I was just some Australian who takes a cappuccino in the afternoon (which is apparently criminal according to just about every Italian I’ve ever had a coffee with). The cake, for all its hype, was not bad. It was not all that sweet but I suppose in the 1800s they probably didn’t have all the artificial sweeteners available that are today. The best part of being in that café, however, was definitely sitting and people watching in the centre of Vienna, a city that had been the heart of an empire, been the home to people the likes of Mozart and been the target of countless sieges throughout the last half century. 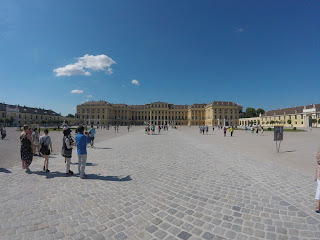 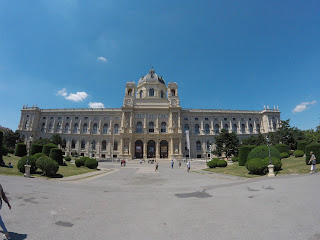 Vienna was impressive, but like just about every city so far in Europe the tourist track was simply palaces, museums and old buildings on repeat. In the last 3 hours of my time in Vienna I made a decision totally worth making. It was about 7 at night and I was pretty tired from walking around. I had seen it all and just wanted to sit and chill and wait for my bus home. As I sat, I thought, why sit alone? Why not try and meet some actual Austrian people, put my German to the test. So that’s what I did. I walked through one of the palace gardens - full of groups of hip looking university students on what was a nice sunny day - silently weighing up my chances with each group. Towards the end of the park, feeling just a slight bit nervous, I found a group of fairly accepting looking students and took the plunge. I went up to them and in my best German (Austria is a German speaking country for those not aware) I told them I was waiting for my bus and asked politely if I could join them. Expecting some awkward stares, I instead got an over whelming, Gerne! (please/of course/be my guest). They not only let me sit, they gave me a beer and had plenty of questions about Australia, my exchange and what I was doing in Munich. It was definitely the highlight! In Vienna hanging out with the locals like I lived there, id trade a slice of chocolate cake in for that any day. In the end we said our good byes and wanting to return the favour I told them if they were ever in Munich id definitely show them around. Vienna was a cool place and I have no doubt that if the majority of Viennese are like that then I could easily say: Vienna watch out, I will be back and maybe for more than two days next time.

In June, I also managed to spend a day in Salzburg. Much like Innsbruck it is a quaint little town nestled between two hills. Salzburg was also very pretty but by far the best are the walking tracks on top of the hills that offer some pretty impressive views. Unfortunately, the castle and the birth place of Mozart had some pumped up tourist prices but the view off the top of the castle is spectactular.

Back to StuttgartIn addition to Austria, a friend from my course in Stuttgart returned to Germany for a visit and so I made my way back to where it all began. It was good to catch up with every one again and even though 6 months had past we were right back at it as if we had seen each other yesterday. I really enjoyed going back because it was a real opportunity to reflect on just what has happened in the last 6 months. I must admit I miss Stuttgart, although Munich is an amazing city, there is just this slight element of imperfection in Stuttgart that gives it a bit of character. I also caught up with a German friend who I had met in January. It was good to see them again too because it wasn’t hard for us to pick up from where we left off. I remember being sad leaving Stuttgart because I knew that if I had only stayed then we would have definitely become good friends. On the last day, I caught up again with my host mother for some coffee and cake and I was so glad that I did. My host mother is probably the first person who I tried to speak German with and if you go back to my first blog it’s clear that I struggled. Back then I could hardly participate in any conversation around the dinner table but this time round we spent the whole time speaking in German without too many problems at all. I think this experience was good closure for me, it was a real indicator that I have come along way with my German. 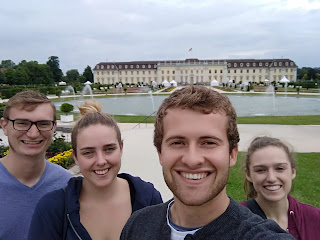 What ive been up to in-between.When not in Stuttgart or in Austria I’ve spent the time in between really trying to recover what was left of my studies. After a solid April and May of just hard partying I found myself with exams looming and 6 courses with unopened books. As a result, I have been almost every day in the library playing catch up. To be honest though, this has been one of the most enjoyable times to date because not only did I develop a routine and catch up on my studies I also got to hang out with the same friends everyday just like I would in Adelaide. With that our friendship had the opportunity to really develop and everyday I would always be looking forward to our gossip sessions, discussions about life or just our chats about some interesting topic over lunch.

Whats now… Today on the 7th of August, I’m sitting in the Kreisverwaltungsreferat in the midst of German bureaucracy, waiting in a very long line simply to register my new address with the city of Munich. I’m in the middle of exams with 3 down and another 3 to go and I’ve just changed rooms ready for next semester. Study is beginning to drag on and I’m beginning to feel the burn, being able to pace yourself during a 6 week exam period is proving to be crucial. It has also been a fairly sad time as many people, including the said friend from the Library, have started to go home and many of the first friends I made in Munich have gone. Simply put I cannot wait for the exams to end, for my parents to come and visit for my birthday and to have a decent break before I do it all again next semester.